I think we both knew this day would come, and now it is finally right in front of us. For seven years, you have been my most constant companion. At my side every step of the way as I moved from adolescence into adulthood. You’ve been my ally, my mirror, and my teacher. You’ve breathed life into parts of me that were previously untended. You showed me how I wanted to be in the world. Who I was and what gifts I had to offer our planet. You brought me friends for the rest of my life. You held a higher vision of me this whole time. You have never stopped loving me, even when I cursed your name into the dark hours of the night.

In August, I came to the knowing that my time as our energetic and literal leader was coming to a close. It was evident we had one more adventure together in the 2020 holiday campaign, and then this chapter would close. I was unclear in that moment what you wanted from the future. You have grown into this wonderful tree whose fruits have been savored by so many and your seeds have created so much other life we may never even see. At the time, I felt that if the tree of Daymaker went away, we would have accomplished what we were sent to do together. The ripples of love you have created in this world are only growing, whether or not the tree keeps on growing. So, at that point in August, I felt peace in where you wanted to go in the years ahead.

At the time, I felt that if the tree of Daymaker went away, we would have accomplished what we were sent to do together. The ripples of love you have created in this world are only growing, whether or not the tree keeps on growing.

Then, you made it known that your work was not done here. Upon sharing the news of my eventual departure with Brent this fall, it was abundantly clear to him that he felt led to take the captain’s seat. And over the next four months, some pretty incredible events played out that enabled us to honor old committments and free ourselves from those constraints to work towards building a beloved organization of the present. And now, for the first time ever, you are going to have years of funding, with no expectation for some outsized return. How magnificent, no? You made your intentions clear, and everything seemed to fall into place so perfectly. 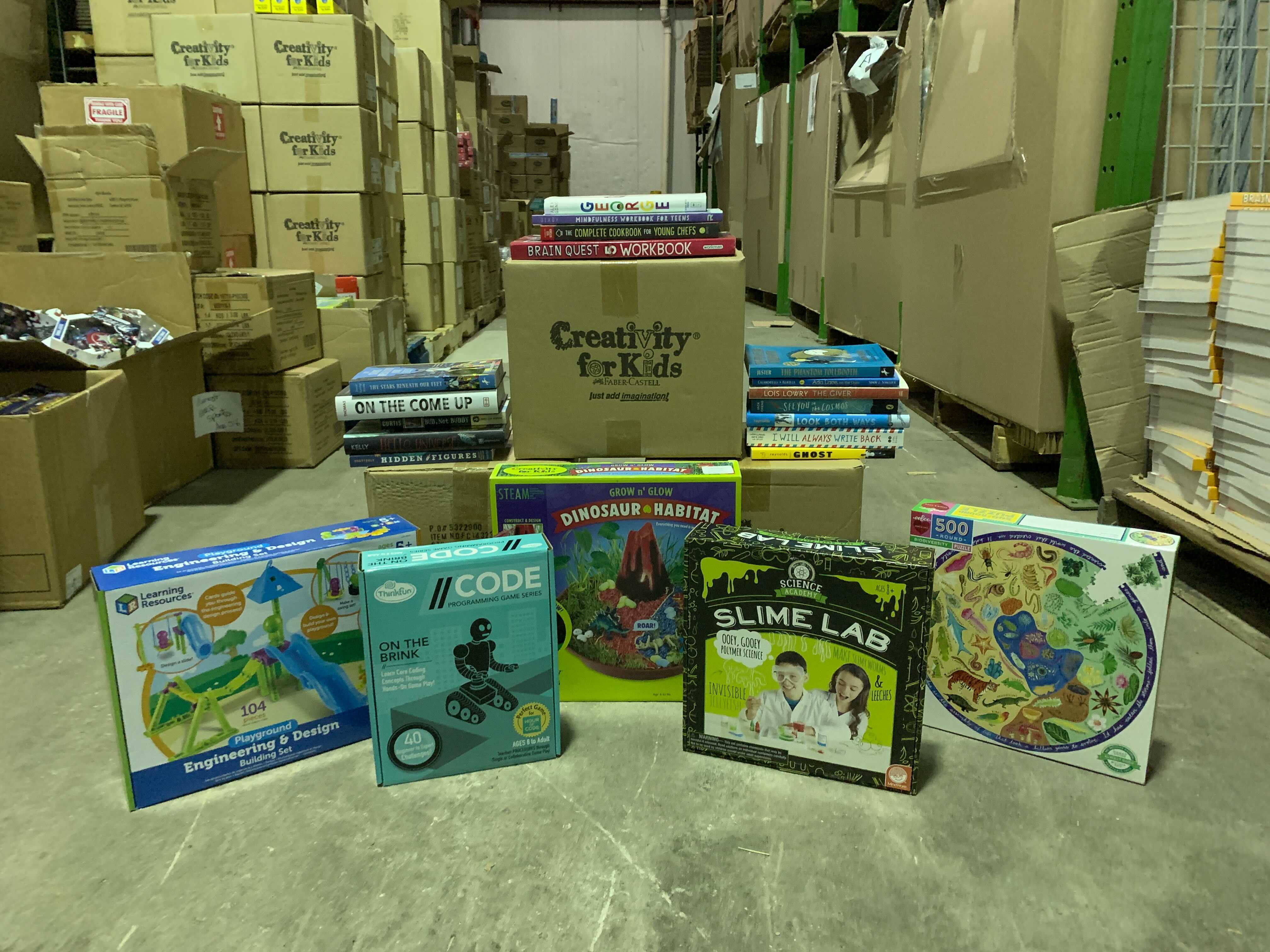 The 2020 Holiday Campaign was the very first time we ran our own warehousing, granting us the opportunity to touch and feel products we had been hearing about from our partners for years.

I feel lucky and eager to watch Brent as our leader. I also see now, that in some form, this was six years in the making. Brent and I first connected in 2015 as he was recruiting for McKinsey, and I was trying to decide to follow a path similar to his or take a shot in the dark with Daymaker. He pushed me to take this leap, and we’ve stayed close since. It’s been a beautiful year since the tables turned and he came on as Chief Partnerships Officer last February. And now, he will be our steward.

You know this, and it’s worth saying: there is almost nobody I would trust with Daymaker. We are trying to thread such a fine needle of surrendered service from a deeper knowing with a thriving entity, and in the work we do, there is a lot of potential for harm. Brent is one of those few people I feel honored to let steer the ship. He has a heart of gold, a conviction for the deeper truths of our existence, and an aptitude to bring higher ideals into action. 2020 was the best year we’ve had at Daymaker, and I believe in large part, it is a result of having Brent’s spirit and skills in the Daymaker pot. He loves you as much as I do, and he is going to amaze us with what he builds and who he gathers to contribute. 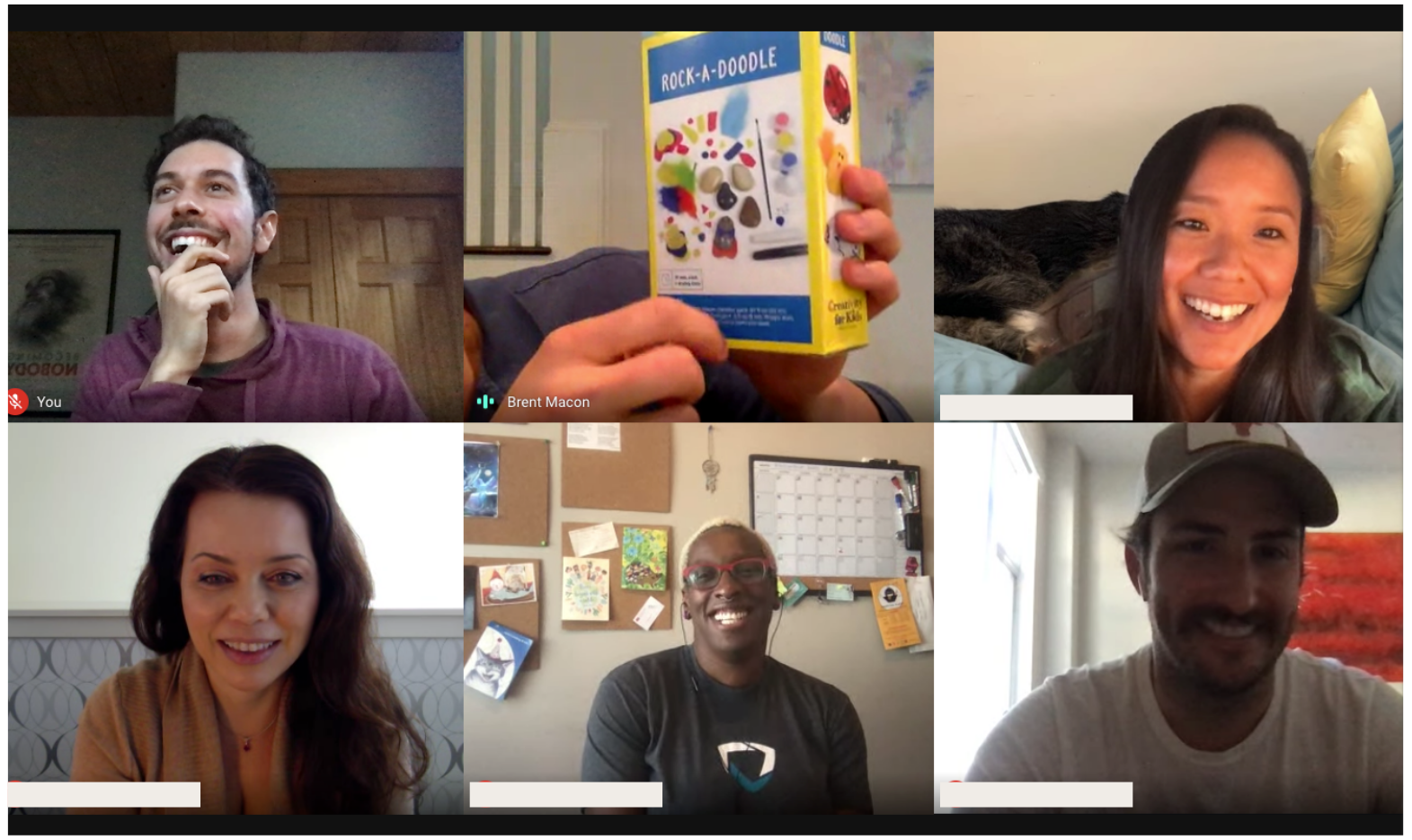 Brent demoing the very first product we designed, Daymaker Discovery Bundles, to one of our favorite company partners.

We know this is no goodbye from me. I will take a few months to slow down. To breathe. To write. To check in with the parts of me that have had less life as I’ve often sprinted through the past seven years. And then, I’ll be back. However you need me, Daymaker. I’ll sit on the board, I’ll be there for Brent in whatever form, and I’ll keep believing. I’ll keep believing that there is something innate within each of us that wants to spring into life in service to something Greater. That our moments of greatest joy are in connection to and in communion with others. That there is a much deeper life to be lived when we’re not running around in a story of separate selves competing for scarce resources. That love is what is underneath all of those illusions of something else. You can count on that for me because, Daymaker, you taught me those things. Or better said, you helped me remember them.

We shared so many moments of absurdity, despair, and utter aliveness. There was the 2016 holiday season when 4000+ gifts were sent to the wrong location and were not going to make it in time for the holidays. The next morning, Zack and I boarded a plane to LA and used one of our nonprofit partner’s warehouse facility to sort gifts our manufacturers had overnighted, and we became west coast delivery drivers for two days. There was that time we hopped in a Lyft to make it from a Cheddar interview in Flatiron to a CNN interview in Columbus Circle on Giving Tuesday in 2017. Our eta was showing arrival 4 minutes after the segment started, and so I hopped out at 23rd, caught the subway, and have never run so fast from the 1 to building security while changing clothes. It was our biggest interview to date, and we just couldn’t miss it. There was the fall of 2018, when out of capital for the fourth time, I was certain we had to shut things down. But, you had given us Ghazale as our guide and matriarch, and she could see the bigger picture enough to push us onwards. There was the $26,000 tax penalty in 2019 when we had only $40,000 in the bank where you showed me that trust, grace, and compassion were stronger energies than fear and scarcity.

There were so many people who let their hearts be touched by our work and whose openness touched us deeper than they’ll ever know. I could go through every year since 2013, and the stories would only get richer. Perhaps we save that for another time. 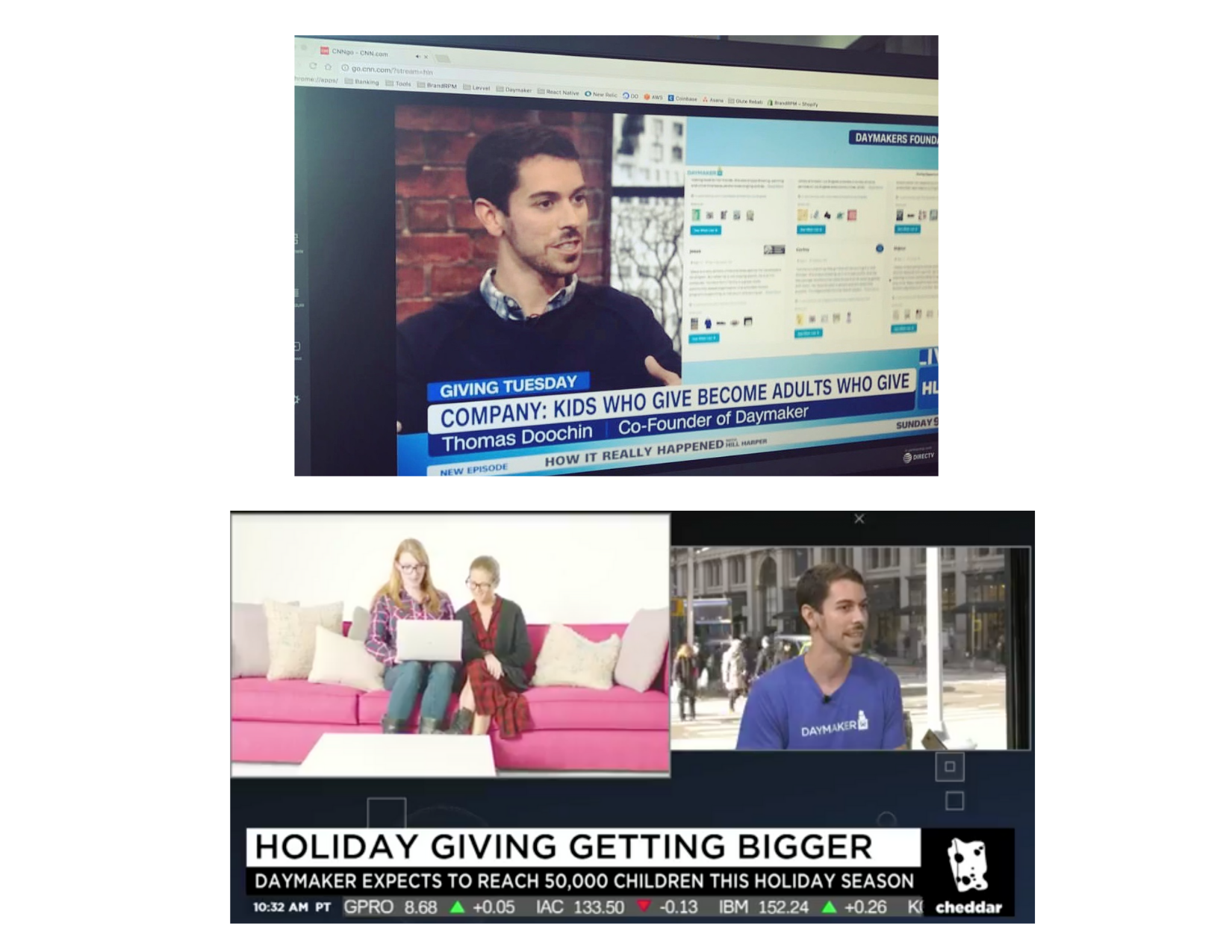 The subway did us a big favor, and we made both segments. Notice the outfit change!

On one hand, it’s not so easy to leave. For seven years and many helpless moments, we were trying to arrive where we are now. With a foundation. With so much affirmation that what we’re trying to create has a place in the world. And the resonance with our nonprofit partners, the companies we support, and the team we’re building. We’re making our own products--running our own warehouse. We’ve been waiting on this for a long time, and now it’s here. And, on another hand, it feels just perfect to step away when it’s "getting good" (and for the record, it's always been good when I could see things as they were). I believe it was my responsibility to get us to this place, and now it’s a privilege to be sturdy enough to begin a new chapter. I feel a lot of space from you in this transition, Daymaker. I know you want nothing more for me than a living into of my purpose. And this step is a big one into doing that, even if the unknown and the untethering can feel overwhelming in moments.

Daymaker, I love you, and I am endlessly grateful. I am who I am today in the world because of how you have sheparded and loved me. Life will feel starkly different without you in my awareness for nine hours a day. And, I sense my care and belief in you will only grow deeper with space. Thank you for showing me what it meant to serve. Thank you for always believing in me. Thank you for giving me so much life in so many forms over so many years. I cannot wait to watch you glow from a new perspective on the mountain. You were born to shine, my dear friend.

With my love always,

Brent is bringing together some pretty incredible people to lead this next chapter. For folks wanting their gifts to amplify the goodness in their heart, Daymaker's a special place. The open roles: Head of Nonprofit Partnerships, Head of Company Partnerships, and VP of Operations.

And for those who have not seen our latest video and want a smile, give it a watch here.